Half-Past Eight Studios > Food > How do you say fondant anyway?

How do you say fondant anyway?

How do you say fondant anyway?

A while back, I was watching a LOT of Cake Boss on Netflix.

And each episode had me saying to myself, “I could do that.” Especially when it was something involving fondant (which was most things). I know – tasteless paste stuff. Don’t worry, read on.

So yeah, I could do that. I mean come on – it’s like playing with Play-Doh, right? Eh. Not really. But still, pretty much.

So I, of course, had to try my hand at it. Plus, I wanted to make something for Dawn, out of the blue, when she wouldn’t be expecting it and this fit the bill nicely. But what about the fondant? Where do I get the fondant?

I could buy it online. But I hate waiting.

I could buy it at my local Michael’s. But I hate spending money (and boy do they want a lot of it).

I could make my own. Oh yes. This falls very well into my motto, “Why pay for something I can do myself?”

OK, so now how do I make my own fondant? In comes Google. Google knows all. A quick search later and I found several sites swearing by [pretty much] the same marshmallow fondant. Sounds good to me!

Lucky for me, for some reason, our pantry always has mini-marshmallows and powdered (confectioners) sugar. And lots of them.

So off I go getting my hands all kinds of sticky.

The directions were spot-on, so I had no problems making my first-ever batch of fondant. I wanted to make Dawn’s cake colorful, so I divided it up and mixed each with a different food coloring, wrapped them up and stored them in the fridge while baked the cake.

A little Devil’s Food Cake, butter-cream frosting and cherry pie filling later and we have an awesome success!

Oh yeah, almost forgot. According to Meriam Webster Dictionary, it is pronounced, fahn-dent – NOT fahn-dahnt. So there you go. 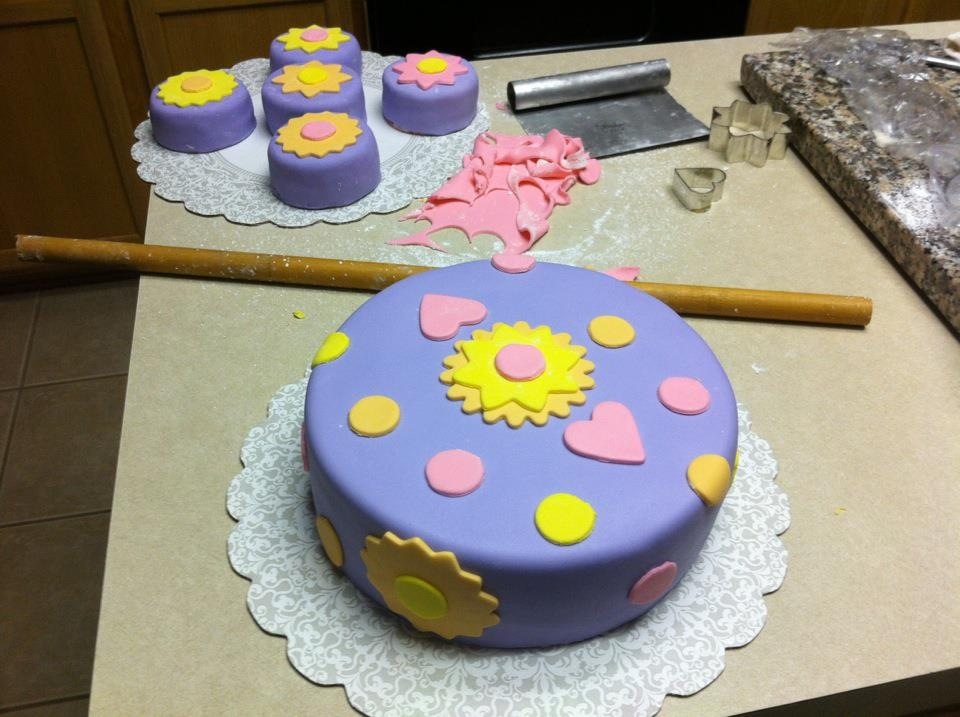