For individuals with February birthdays, the amethyst makes a perfect birthstone. This month is often cold, dark and short for many people around the world, so the amethyst—which is often associated with qualities of peace, courage and stability—is the right gem for individuals who need a little extra warmth and strength this time of year.

A beautiful purple quartz, the amethyst is an easily recognizable gem, but you may not know everything about it just yet! 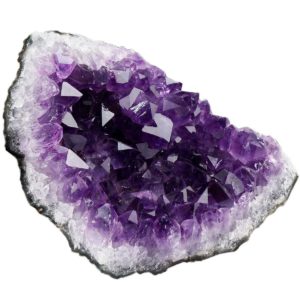 Amethyst is purple quartz and is a beautiful blend of violet and red that can be found in every corner of the earth. The name comes from the Ancient Greek, derived from the word “methustos,” which means “intoxicated.” Ancient wearers believed the gemstone could protect them from drunkenness.

Amethyst, as previously mentioned, is composed of quartz, which is the second most abundant material found in the Earth’s crust. Amethyst gets its color from irradiation, iron impurities and the presence of trace elements. Its hardness (a 7 on the Mohs scale) is the same as other quartz, which makes it a durable and lasting option for jewelry.

While amethyst is most commonly recognized to be a purple color, the gemstone can actually range from a light pinkish violet to a deep purple that can read more blue or red, depending on the light. Sometimes, even the same stone can have layers or color variants, so the way the gemstone is cut is important to the way the color shows in a finished piece.

Amethyst often occurs in geodes or in the cavities of granitic rocks. It can be found all over the world, including the United States, Canada Brazil and Zambia.

The amethyst is not only the February birthstone, it is also used to celebrate the 6th and 17th year of marriage.