For babies born in January, the garnet is the perfect gem to represent their birthstone. This beautiful stone, which is most commonly red but can be found in a range of other colors, symbolizes peace, prosperity and good health. Some say it even has the power to give the wearer eternal happiness, health and wealth.

We say it’s the perfect way to start each year!

The word “garnet” comes from the 14th Century Middle English word “gernet” meaning dark red. The word is derived from Latin “granatum” which means seed, and is called so because of the gemstone’s resemblance to the beautifully red seeds of the pomegranate. 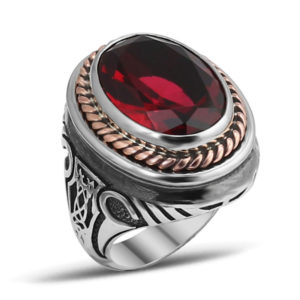 Garnet is actually the name of a group of minerals that comes in a rainbow of colors, from the deep red of the Pyrope garnet to the vibrant green of Tsavorites. Some rare garnets are even blue, colorless, or—most rare of all—change colors in different lights. But the most common color is a beautiful range of reds, from rust colored to deep violet-red.

The garnet is a very durable gemstone (6.5-7.5 on the Mohs scale) found all over the world, including Wyoming, Czech Republic, Greece, Russian, Tanzania, Madagascar, Sri Lanka and India.

The folklore on garnet is extensive. Legend has it that the garnet can bring peace, prosperity and good health to the home. Some even called it the “Gem of Faith,” and it’s believed that to those who wear it and do good, more good will come. (Conversely, it was also said to bring very bad fortune to those who commit bad acts while wearing it.)

The garnet also symbolized deep and lasting friendship. With that legend in mind, give a garnet to someone whose friendship you deeply value.

No matter why or how you wear garnet, this beautiful gemstone is perfect for those who share January birthdays and get to start each New Year with a sense of goodwill, happiness, and purpose.