Ruby, the king of precious gems, is the birthstone for fortunate folks born in July. Symbolic of the passion and energy associated with the color red, the vibrant ruby is said to bring love and success. 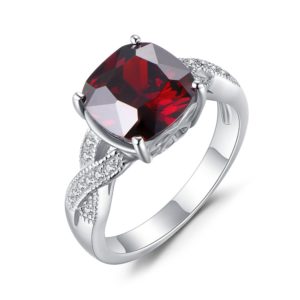 Ruby is the red variety of the mineral corundum, colored by the element chromium. All other colors of gem-quality corundum are called sapphire, which means color is key for this royal stone.

Accordingly, the name “ruby” comes from rubeus, the Latin word for red. In ancient Sanskrit, ruby translated to ratnaraj, which meant “king of precious stones.” These fiery gems have been treasured throughout history for their vitality.

The chromium that gives ruby its red color also causes fluorescence, which makes rubies glow like a fire from within. Paradoxically, chromium is also what makes this gem scarce because it can cause cracks and fissures. Few rubies actually grow large enough to crystallize into fine quality gems, and these can bring even higher prices than diamonds.

Ruby’s strength and red fluorescence make it valuable for applications beyond jewelry. Both natural and synthetic rubies are used in watchmaking, medical instruments and lasers.

Due to its deep red color, ruby has long been associated with the life force and vitality of blood. It is believed to amplify energy, heighten awareness, promote courage and bring success in wealth, love and battle.