June is one of only three months that has three birthstones associated with it, giving the lucky people born in June a choice of gemstones between pearl, alexandrite and moonstone.

June’s birthstones range from creamy-colored opalescent pearl and moonstone to the rare color-changing alexandrite—one of the most valuable gems on earth. With this spectrum of price points and color options, people with June birthdays can choose a beautiful gemstone to fit any mood or budget. 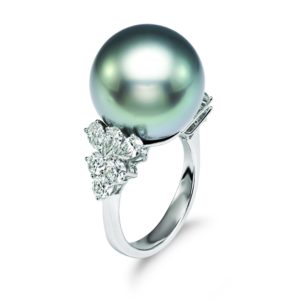 Pearls are the only gemstones made by living creatures. Mollusks produce pearls by depositing layers of calcium carbonate around microscopic irritants that get lodged in their shells—usually not a grain of sand, as commonly believed.

Appropriately, the name “pearl” comes from the Old French perle, from the Latin perna meaning “leg,” referencing the leg-of-mutton shape of an open mollusk shell. Because perfectly round, smooth natural pearls are so uncommon, the word “pearl” can refer to anything rare and valuable.

In many cultures, pearls symbolize purity and innocence, which is why it’s tradition for a bride to wear pearls on her wedding day.

A relatively modern gem, alexandrite was discovered in Russian emerald mines located in the Ural Mountains. Legends claim that it was discovered in 1834 on the same day that future Russian Czar Alexander II came of age, hence the name honoring him. Because this unique gemstone changed colors from green to red—the national colors of Russia—alexandrite became Imperial Russia’s official gemstone. 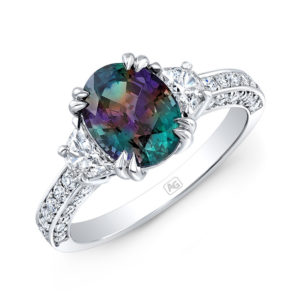 Often described as “emerald by day, ruby by night,” alexandrite is a rare variety of the mineral chrysoberyl that changes color from bluish green in daylight to purplish red under incandescent light.

Associated with concentration and learning, alexandrite is believed to strengthen intuition, aid creativity and inspire imagination—bringing good omens to anyone who wears it.

June’s third birthstone, moonstone, was named by the Roman natural historian Pliny, who wrote that moonstone’s shimmery appearance shifted with the phases of the moon. 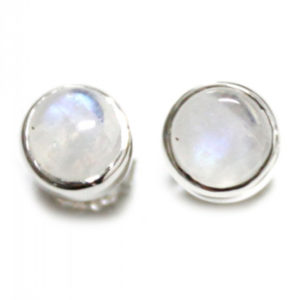 The most common moonstone comes from the mineral adularia, named for an early mining site near Mt. Adular in Switzerland that supplied this gem. This site also birthed the term adularescence, which refers to the stone’s milky glow, like moonlight floating on water.