September’s birthstone is the sapphire—a precious gem of wisdom, loyalty and nobility. This stone is said to focus the mind, encourage self-discipline and channel higher powers.

When people say “sapphire,” they’re usually referring to the royal blue variety of this gem, although it can occur in all colors of the rainbow (except red, which is classified as ruby instead).

This lovely gem gives September-born babies a full spectrum of options when choosing the shade of birthstone that best represents them. 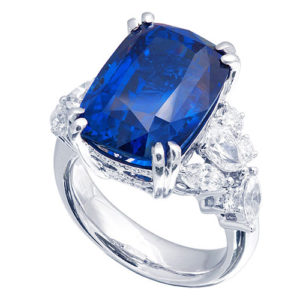 Although sapphire typically refers to the rich blue gemstone variety of the mineral corundum, this royal gem actually occurs in a rainbow of hues. Sapphires come in every color except red, which earn the classification of rubies instead.

Trace elements like iron, titanium, chromium, copper and magnesium give naturally colorless corundum a tint of blue, yellow, purple, orange or green, respectively. Sapphires in any color but blue are called “fancies.”

Pink sapphires, in particular, tow a fine line between ruby and sapphire. In the U.S., these gems must meet a minimum color saturation to be considered rubies. Pinkish orange sapphires called padparadscha (from the Sri Lankan word for “lotus flower”) can actually draw higher prices than some blue sapphires.

Sapphires symbolize loyalty, nobility, sincerity and integrity. They are associated with focusing the mind, maintaining self-discipline and channeling higher powers.