Phew! That one took a while!

LAST summer, I was approached by Explorium Denton* and asked if I could build a life-size Operation game, but with real-to-life body parts instead of the game’s fictional ones (Bread Basket, Funny Bone, etc).

And in true me fashion, I replied with, “Ummm… sure!” 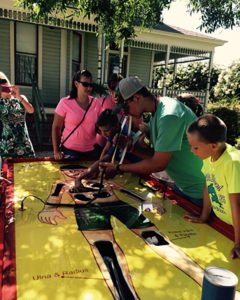 Fast-forward to THIS summer – and it’s done! It’s first official use at an Explorium Denton event was at the July 18, 2015 Denton Community Market booth. And according to those in the know, it was a huge success!

I wasn’t sure which category to post under, as I was able to utilize many skill-sets that would fall under any number of them: 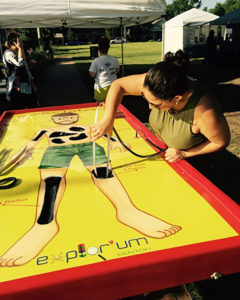 The table works the same as the smaller version you all played with as a kid. The buzzers sound and the nose lights up when your tweezers touch the edge of the hole through which you are attempting to retrieve a body part. I created two sets of tweezers so more than one person could play with the table at a time.

The red body of the table is an enamel-covered wood frame in two pieces, connected by a piano hinge so it can be folded in half for transport and storage. Four caster wheels fit into holes on one side, held in by rare-earth magnets to prevent them from falling out when taking the the table up or down.

The face of the table is a custom graphic printed on a sheet of 4×8 3mm PVC (except the red body part lettering, buzzer and plug graphics which I cut from vinyl using my wife’s Silhouette) protected by 1/8″ Plexiglass.

The organs and bones were all 3D printed. After some cleaning up, they were then sprayed with several coats of primer to fill in the layering and other textures as well as give them all a solid base before being hand-painted using Fashenhues ceramic stains for a (what I think is) life-like appearance. 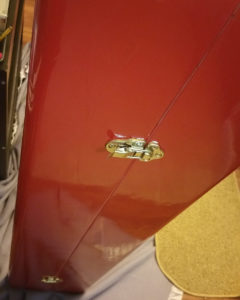 The two sets of tweezers were fashioned from bars of aluminum, connected to the table by coiled audio cable (think guitar cable) whose 1/4″ plug connects to either side of the table.

It was a lot of fun making things up as a went on this one – but I think it all turned out rather well!

Well, except for the fact that I was so sleep-deprived by the time I finished it (just in time to be able to get it to the booth and me to my flight out of town), I mixed up the names of the lower arm and the lower leg when placing the vinyl lettering. I fixed it.

Is That a Coin in Your Pocket?